contact@darksquaregames.com February 28, 2016 How To Memorize Pi

It is impossible to remember all the digits of pi because it is impossible to calculate them in the first place. By 2013, pi had been calculated to more than 13.3 trillion decimal places (~10^13) and the calculation continues. For scientific purposes, it is rarely necessary to work with more than 40 digits but the memory masters can remember many more.

Here, we are going to consider the Major System for memorizing pi. This powerful memory technique was created by Stanislaus Mink von Wennsshein in the seventeenth century and is widely used.

The capitalized letters are used to remember the name ‘Stan Marloshkevip’ (vowels have been added). This name acts as a mnemonic for the Major coding system, to help deciphering. Note that the name contains the phonetic consonants in order. Note that there are a few sounds that do not appear, such as ‘oo’ (we only need to represent 10 digits) – these sounds are used as fillers, as are vowels. There are several other ways of memorizing this list, including one based on images. Settle on one method an practice it.

Once you have learned this, then vowels are added to create words. For example, TURTLE, when decoded is equivalent to 1415 (T*RTL* ) ignoring vowels *. There is no real limit to the words that can be created (other than the language itself). Start with simple words using one sound, such as law, fort. Then move on to more complex words.

These words are then used to create a memorable story, or the stops on a travel trip. In a story, it is best to avoid the use of the same word twice, unless for a genuine reason. For example, the string 1415 occurs twice in the first 20,000 digits of pi, 4567 occurs three times, and shorter strings are more frequent. Some users of the system use a list of maybe 100 ‘peg’ words, such as cat (71) and tar (14).

There are many examples of ready-made stories. If you want to write your own then you only need to write it once.

The power of this method is transferrable to memorizing any string of numbers, from phone numbers to other irrational numbers such as e (Euler’s Number) and √2, if you really want to take on a challenge. A neat trick is to memorize the product of pi * √2 to n digits. Then you can claim that you can multiply the two numbers in your head. Of course, you know the answer already!

The unofficial record holder for memorizing pi is Akira Haraguchi, of Japan, who claimed a record of 100,000 digits in 2006.

How to Memorize Pi using the Link System

contact@darksquaregames.com February 24, 2016 How To Memorize Pi

How to Memorize Pi using the Link System

However, many people do take on the challenge of memorizing pi and there are several quite different techniques to assist memorizing pi – or at least several thousand digits. The memory routine we will discuss here is known as the Link method.

Of course, the numbers themselves can also be used.

This is the fun part – build a story by linking the words together. Generally, the most effective approach is to create a sequence of events. Poetry too can be used – nonsense poetry tends to be particularly memorable.

Of course, no self-respecting author would claim that as real prose, but it only needs to serve to memorize pi, and not to entertain a reader. You only have to make it work for yourself.

This method has the disadvantage of all association techniques – when reciting the digits of pi it is necessary to carry out real time decoding. It can be quite fun though.

Composite methods can also be used to memorize the digits of pi, so that, say, the first block of a hundred digits uses a story, the next block uses a piem and so on. Then the blocks can repeat – obviously with different stories, as we all know pi does not have repeating patterns of digits.

How to Memorize Pi using Word and Sound Substitutions

contact@darksquaregames.com February 21, 2016 How To Memorize Pi

How to Memorize Pi using Word and Sound Substitutions

It is said that there are two types of people who memorize pi:

There are other learners, too. Some people may be learning the digits of pi as part of a charity fundraising event or as a result of a challenge at school, but whichever group you belong to you will need to choose a technique to memorize pi.

Daniel Tammet is the European record holder for reciting pi from memory – he listed 22,514 digits in just over five hours. He is a savant and describes how each positive integer up to 10,000 has its own unique shape, color, texture and ‘feel’ in his mind. Here we will be a little less ambitious and describe how to memorize pi using word and sound substitutions in a way good enough for you to retain several hundred digits.

This involves using a language which is known as ‘pilish’. In pilish, a number in pi has an associated word with the corresponding number of letters. This language is used to write out sentences in “pilish. These can be linked to form a piece of prose or a story. There are a number of well-known examples such as:

There is a very well-known example where Mike Keith wrote “Cadaeic Cadenza”. This is a short story of 4,000 words which encoded 3,835 digits of pi. He refined the method further to use words of more than ten letters to represent specific strings of digits. Going even further, he collated this with a series of other items into a book which when worked through sequentially uncovers 10,000 digits of pi.

To memorize pi, you can pick an ‘off the shelf’ piece of prose – such as “Cadaeic Cadenza” – or you can write your own, though it has to be said that this latter approach can be quite challenging. Then all you have to do to memorize pi is to memorize the story. When reciting the digits of pi using this method, you have to visualize the word and translate it to a number. That puts an extra step into the retrieval process for each digit.

This technique is aligned to that of ‘piems’ – the poetic equivalent. Just as most writers would say that poetry and prose are as unalike as chalk and cheese so it is with piems and prose written in pilish. Prose can by quoted almost continuously, but poetry has both horizontal vertical structural dimensions which gives even more opportunity for encoding the digits of pi. Therefore, ‘piems’ is the subject of a separate article on the techniques for memorizing pi.

How to Memorize Pi by Grouping Digits

contact@darksquaregames.com February 14, 2016 How To Memorize Pi

How to Memorize Pi By Grouping Digits

There are five or six methods for memorizing pi, that most well-know of irrational numbers. Which method works best depends on the way an individual’s brain is wired. Some people prefer sounds, others visualize digits and others use a range of memory techniques. The method described here uses the technique of grouping digits to memorize pi.

First, you need to find a calculation of pi so that you have access to the list of digits – how many are you aiming for? For a modest target (say up to 50 digits) the simple method is fine.

A disadvantage of the simple coordinate method is that if you misremember then you have to start over. If your ambitions are greater, then the advanced method can help you extend the number of digits progressively and also enable you to pick up in the middle of a list.

There are several flavors to this method for memorizing pi, but they generally involve a range of grouping techniques, for example:

Going further, you can have one directory for friends, one for famous bands or musicians, and so on! Even with Z you can have Zach and ZZTop!

Some people find that singing helps them to remember – if you have a favorite tune that can help. Pop music is usually in 4/4 time which provides a good rhythm although you may want to shift time signatures as you work with larger groups of digits. That’s expert level!

Finally – Be Practical when Memorizing Pi

Rehearse, rehearse, rehearse, that is the key and it helps to have the digits grouped on cards to make that easy even when you are in the coffee shop, although you may get some strange looks! And if you want to go further, there are even more refinements to take you from expert to master level in memorizing pi.

Mazed - From a Failed Client Project to App Store

This week we finally submitted Mazed into the App Store. The development for Mazed began in early 2015 as a client gig but unfortunately the client lost interest in the app and a promising prototype had to be locked up in a drawer. Looking back at our unfinished projects, Mazed was definitely bugging us the most as we had already collaborated with Elliott on the designs and the gameplay itself was already finished. We decided to start approaching the client again and managed to get a hold of him to get a single “go for it” response when we asked if it would be ok to publish it ourself. Legally speaking there was never a problem, but we felt better knowing for sure he was not interested in the project anymore. Also every major decision about the game was made by us so we felt safe to go ahead and finish the game.

The original game idea was to use the phone’s gyroscope to guide a number of balls through a series of labyrinths. Users would be able to race against time to compete with their friends. We would have a set list of mazes to be selected. After getting the green light from the client, we decided to add gold, silver and bronze medals for each level to motivate players to improve their times. This became one of the most fun aspects of the game while testing and we are very happy with the addition. 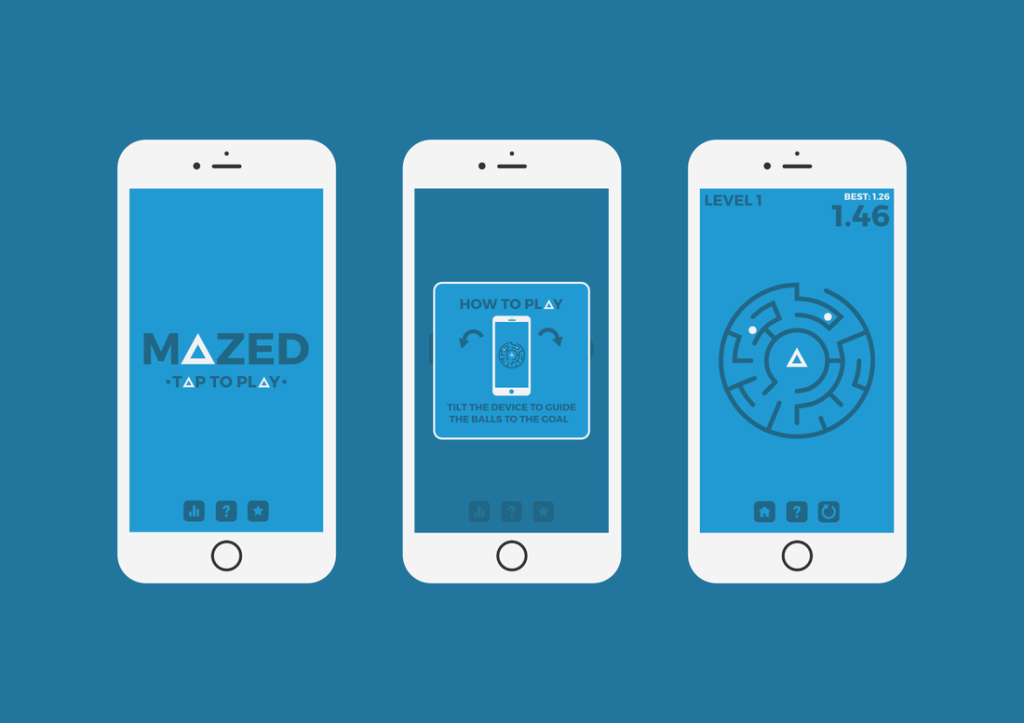 As with most of our games, we used SpriteKit to develop the game and it was fairly easy to create the physics nodes using the maps as images. We simply loaded the maps as images and then created the physics object tracing the lines with [SKPhysicsBody bodyWithTexture:texture]. This approach required the map to be drawn in a single line, so there couldn’t be any floating bits of the map in the middle of the map. The map also couldn’t be closed so we drew invisible holes into the maps for SpriteKit to be able to read the map properly. The result ended up a lot faster than we expected and we didn’t run into any performance issues calculating the physics.

It is very frustrating to see unfinished projects, especially ones being so close to be finished. We are very happy that we got to finish Mazed as our own title. Most importantly it’s another project skeleton in our drawer that we were able to finish, leaving us more room for new ideas! The app will be released in the coming weeks.