Catching a cold forced me to take it easy over the new year’s eve but it also made me rest and charge my batteries for the year to come! 2014 was a busy year for me in many ways but I finally took my first steps in becoming an indie game developer and I can only be happy over the games I created, the connections I made and the things I learnt over the year.

AdMob
In order to better understand how advertising on mobile works, I wanted to do more research on the advertisement networks by jumping on the other side of the table. I decided to invest a small amount of money to advertising Tap to Zap and to see for myself, what kind of numbers you can reach. I decided to start with one of the bigger players in the industry, Google’s AdMob. Octrion helped me create a simple ad banner and with a 20 euro investment I reached the following numbers:

First of all, it always amazes me just how many impressions you can get with such a small investment. On the other hand it’s also crazy how so many views only result in so few clicks but when I think about my own mobile gaming, i must’ve seen thousands of ads and only click on them by accident.

Secondly, I have to be very happy with the results as according to my research, the CPI can grow to be as high as $1. 70 installs doesn’t sound like a lot but there was definitely a spike in the downloads also the day after. When bigger mobile game companies often complain about how expensive it is to acquire users nowadays, I can really see why. As Tap to Zap only works on advertising currently, the return on the invest would depend on how long the players would stay engaged with the game.

The banner we used

The biggest thing I learnt was about targeting the ads. Some advertising networks divide the targeted countries into several tiers and the higher the tier, the higher is the cost for install from that specific country. This is because not only are the bigger markets more attractive for the advertisers, the average amount of  boot-ups in those locations is also higher. Chartboost (a game focused advertising network I use myself) offers a pre-set list of their countries and their CPI. 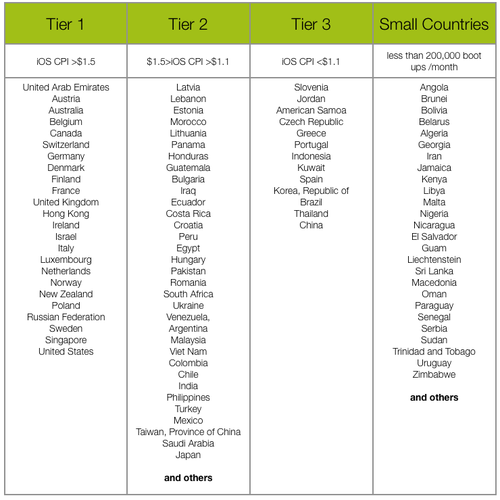 Overall the experience was fun even though the money burnt really fast (like, really fast). The money I invested was obviously way too small to give real results, but I found this a great learning experience and made me consider these things further.