We are working on a text adventure game!

We are very excited to announce a new project we are working on. We connected with an aspiring writer, Joe Forster, who presented a game idea he had written a story for. He had been working on a mobile text adventure game and the story was already finished. As someone who used to love text adventures as a kid and who is a big fan of games like Lifeline and A Dark Room, I was extremely excited to get this project rolling.

The story of the game starts with the player getting randomly contacted by Aila, a computer AI whose developer has died before being able to finish developing her. The dialogue between Aila and the player is witty, funny and has several endings and storylines depending on how the user reacts to Aila. 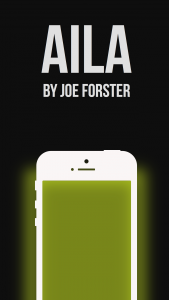 We want to build the game engine in a way that we can easily create more games with it in the future. So far we’ve been able to work out a way to easily implement the existing script into the game. The original story was written in a text document but we were able to painlessly convert and import it as a CSV file. The story works quite similarly to those old choose your adventure books: every decision you choose will make you jump to the next piece of dialog. Joe is already working on a second story and hopefully we can produce more awesome text adventure games in the future! We definitely have to look into using something like Twine to create the stories with. 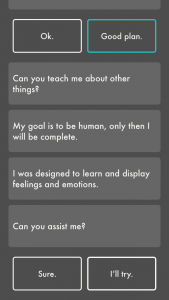 Early screenshot from the game

One thing we really want to focus on with Aila is accessibility in the game. Text adventures are a great game genre for gamers with vision problems and we want to make sure that the game will be playable by as many users as possible.

We are very excited about this opportunity and hopefully this will only be the first of many text adventures we are publishing together. If you want to be notified when the game is launched, join our mailing list!